A few weeks ago I took a motorcycle ride to West Virginia, ate Sunday dinner at my aunt's house, talked about gluten intolerance, and learned that Preston County WV has a yearly buckwheat festival. This got me to thinking about buckwheat pancakes, but all of the recipes I found on the web used wheat flour with the buckwheat, and most relied on baking powder for leavening. 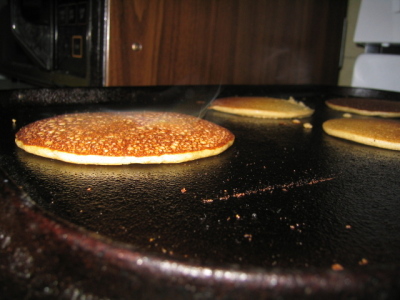 Baking powder is one of the reasons that I don't particularly enjoy gluten-free baked goods: for some reason, the gluten-free flours that I've used develop a bitter taste when chemically leavened. Bitterness is a characteristic of alkalis, and baking soda (one half of baking powder) is a mild alkali, so I suspect that's the cause. However, I never noticed the bitterness with wheat flour, and baking powder biscuits were a staple breakfast item for us. Perhaps wheat is slightly acidic, or otherwise buffers the alkali taste. Or perhaps rice flour is slightly basic, and enhances it. Regardless, it's a distinct turn-off.

Then I remembered John Thorne's recipe for sourdough buckwheat cakes in Serious Pig. His recipe, while it contains wheat flour, relies almost entirely on yeast for leavening — and not an actual sourdough starter (with which he is very familiar), but commercial yeast. This was a recipe with possibilities.

It still left the issue of wheat flour — or rather, its absence. This was a simple problem to solve: Thorne's recipe omitted eggs, mine would use them. No need for gluten.

Buckwheat, despite its name, is not at all related to wheat. In fact, it's in the same family as rhubarb. It has relatively high protein content (11%), and is one of the few vegetable sources that provides a complete protein — all of the amino acids that humans need. More information about its cultivation can be found from Wikipedia and Purdue University.

You can buy buckwheat in two forms: flour and groats. Buckwheat flour is specified for most recipes: it has the same consistency as wheat flour, but a gray color similar to rye. It has an earthy flavor, that's a bit stronger than wheat but to my taste still neutral. To my surprise, buckwheat flour doesn't seem to be readily available in supermarkets: our local SuperFresh doesn't carry it, even though they carry many other alternative flours; we had to go to Wegmans. My reading leads me to believe that it's also seasonal: there's one harvest, starting in late September, which means that the stone ground wholegrain flour you buy in July is nowhere near fresh.

Buckwheat groats are coarsely milled whole grains, similar to (although smaller than) steel cut oats. They're roasted and sold as “kasha,” or milled to the consistency of farina and sold as “cream of buckwheat.” Before buying, read the box: kasha as a word refers to any type of porridge, so it's possible that you'll see other grains marketed as such. Also check the source, if you're concerned about cross-contamination.

Kasha has a strong, distinctive smell and flavor, that could be described as everything from “nutty” to “resinous.” To me, it smells like a New England forest in the early fall or late spring: just at the edge of the growing cycle, when the smell of new growth is mixed with that of fallen leaves. Not at all unpleasant, but did I mention it was strong? I know when my wife is making kasha porridge for breakfast because the house soon fills with the smell.

This intense flavor leads to intense pancakes: although I've made pancakes with buckwheat flour, I far prefer using ground kasha. I grind it myself in the blender, about a cup at a time. Blending for 30 seconds at a low-medium speed, with a few shakes along the way, cuts the groats into a consistency similar to durum semolina. 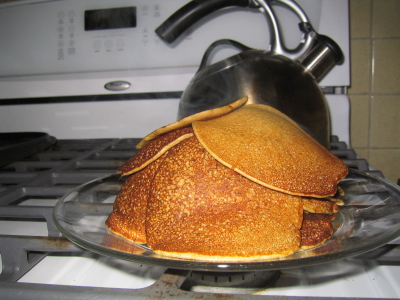 Makes enough pancakes for two people, with a few left over — although we generally don't eat with sausage or other sides, so if you do there will be enough for 3. Simply multiply the recipe if serving more.

This recipe has two parts, and starts the night before you make the pancakes. Combine the following ingredients in a 2 quart (or larger) glass bowl:

Stir this well, and put it in a warm place to ferment overnight. Thorne only uses ¼ teaspoon of yeast, and would be horrified by my use of sugar. While I agree with him for wheat-based recipes, I found that the yeast wasn't terribly active given a diet of buckwheat alone, even after I bought a new bottle. I'm guessing that commercial yeast is selected to feed on the starches found in wheat flour, and simply can't metabolize buckwheat as easily. Sugar gives the yeast colony a “jump-start,” building an initial population that can then spend the night inefficiently processing buckwheat starches. 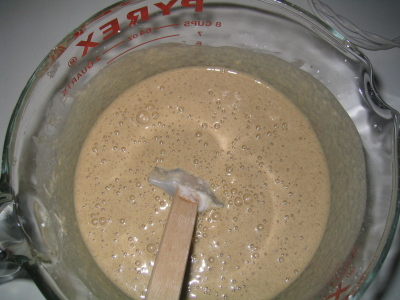 The overnight fermentation does require advance planning: yeast-leavened buckwheat pancakes aren't a spur of the moment breakfast. I believe that you could keep the batter in the refrigerator for several days, but haven't tried it. Thorne is adamant that the overnight fermentation softens the flavor, and that you shouldn't try to rush the process with extra yeast in the morning.

The starter has a wonderful smell: similar in kind but sharper than whole wheat, without a strong yeasty smell. It should be bubbly, especially when stirred, but will not have changed its volume measurably.

The second step of the recipe takes place just before you heat the griddle. Add the following to the fermented starter:

There are a few things that require explanation here, and I'll start with the tapioca flour. When I first made these pancakes, I thought that buckwheat would have the same water absorption characteristics as rye or whole wheat: you need slightly more water than flour, by volume. That seemed to be confirmed by the thick, porridge-like consistency of the initial mix. However, by morning it was too thin. Having tapioca flour on hand, I threw it in as a thickener, and ended up with a nice consistency. My current recipe uses equal parts water and kasha by volume, and I've made them without using the tapioca flour, but I still use it when available.

Next is the sugar. This is here for flavor enhancement, and can be adjusted to your taste. The yeast may start feeding on it, but there's not going to be much time for them to act. You could substitute molasses, although I think it makes the cakes more likely to stick to the griddle.

Butter is also present for flavor. Omit it to save a few calories, although again, you may find the cakes sticking to the griddle. The quantity is vague because we buy butter in randomly-sized blocks at our local farmers' market, and I've gotten into the habit of eyeballing quantities: a 2x1x¼ slice should be about 1 ½ tablespoons.

Finally, the separated and beaten eggs. As I noted above, the egg protein will largely compensate for the lack of gluten. I've decided that beating the whites is an important step: I omitted it the last time I made this recipe, and ended up with pancakes only slightly thicker than crepes. I'm not fanatical about folding the whites into the batter; in fact, I use the electric mixer to do it. But don't beat all the air out of them.

That's it. Cook and eat. These cakes will absorb a lot of maple syrup, and we sometimes eat them with yogurt and jam. If you like to add things to the cakes (like blueberries), do so a minute or so before flipping — when the bubbles begin to form.