This is the starter about six hours after feeding. Its consistency is that of a thick, bubbly pancake batter, and it has a definite “sour” smell. 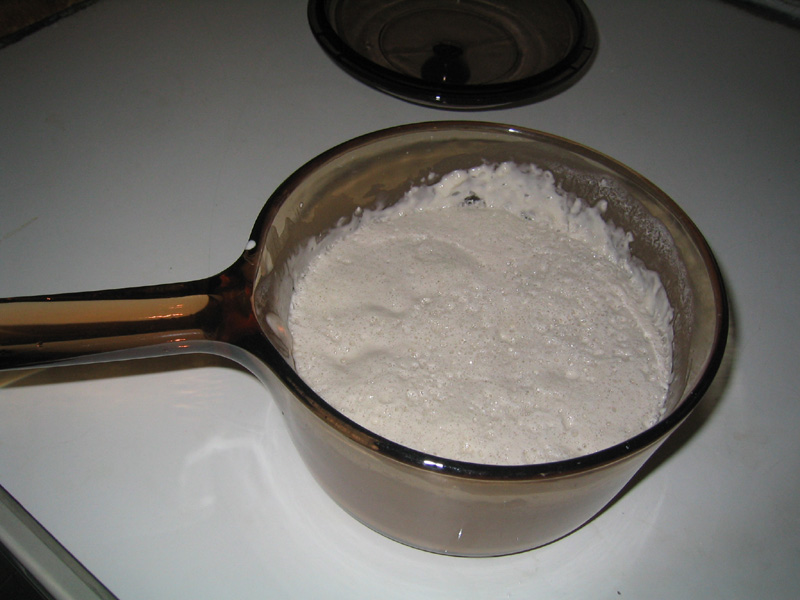 This is the sponge just after it's been mixed. It will rise to the top of this bowl overnight, then fall back to about the same level. 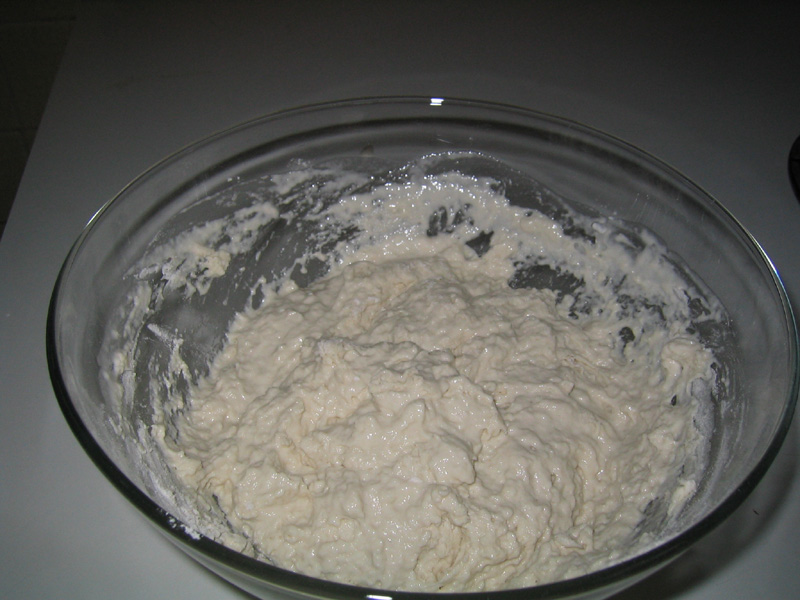 The dough is almost done. It's formed a ball around the dough hook, but is still a little sticky: if you touch it, some of the dough will stick to your finger. It's also sticking to the sides of the bowl; when done it should “clean” the bowl — although that doesn't mean the bowl will be spotless! I'd add another ¼ cup of flour here, and give it a few more minutes to knead. 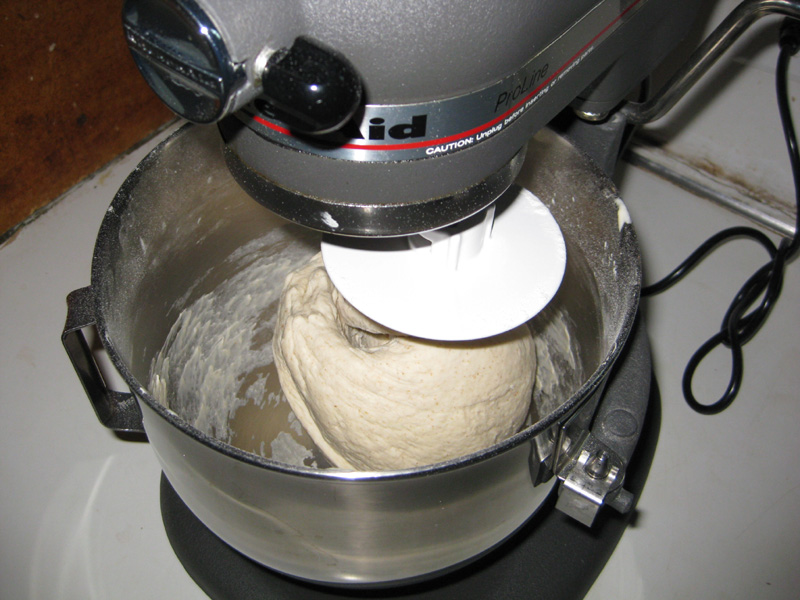 I've divided the dough in half, and formed the rough loaves. There are a lot of ways to form a loaf: my approach is to stretch the dough and fold it back on itself several times, followed by patting it into shape. This gives a fairly rustic appearance to the final loaves, as you'll see later. I also coat the inside of the pans with butter, which makes it easier to remove the loaves, as well as adding some (slight) flavor. Finally, note the glass pans, which provide a very even heat to the loaves. 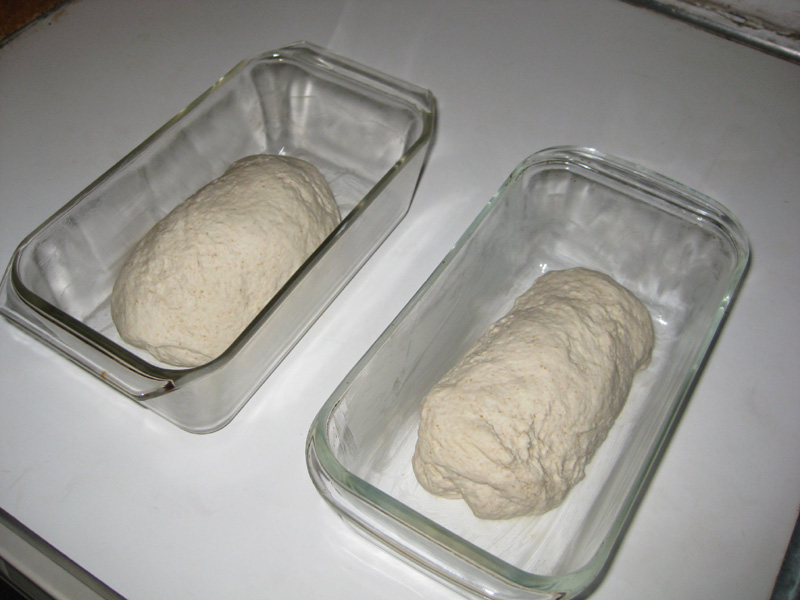 The dough has risen about six hours in this picture, and has more than doubled in volume. I generally let it rise for 3–4 hours undisturbed, and then check up on it ever half hour or so. When it hasn't visibly risen in the past half hour, it's time to bake. Note that one side of the front loaf is lower than the other: this is the result of my forming technique. 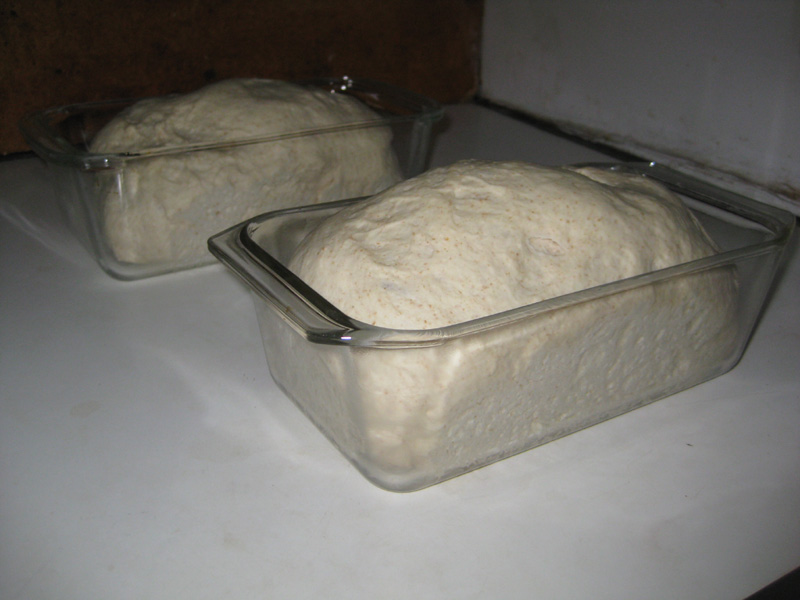 Out of the Oven

The final result. Bread shrinks slightly when it bakes, so you'll know it's done when it drops cleanly out of the pan — although it may stick at isolated points, in which case a knife along the side of the pans will help. It should also sound hollow when you tap the loaf. Some of the people who've used my starter complain that the loaves never brown. I suspect this happens because (1) there aren't enough sugars left to easily caramelize, and (2) they aren't using a high-enough initial temperature (or maybe their oven looses heat too quickly). The first you can't do anything about (other than adding sugar to the dough), so pay attention to the second. 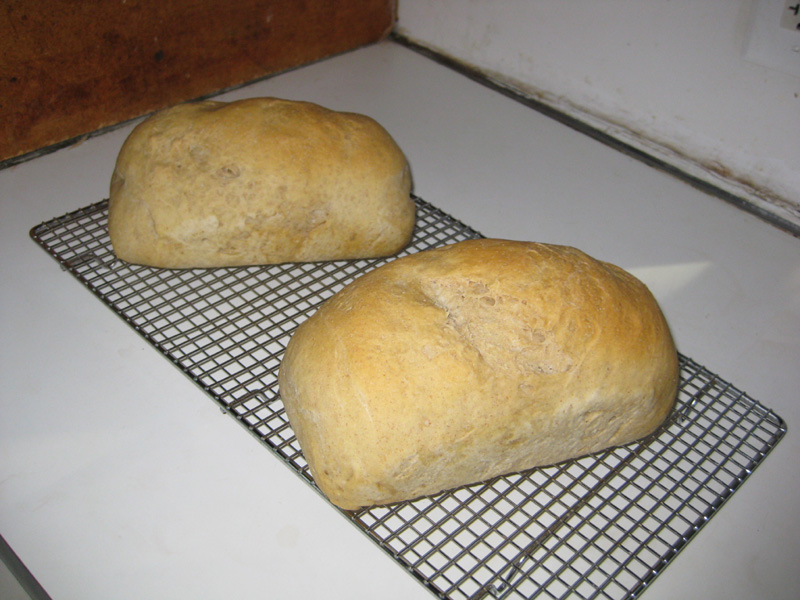